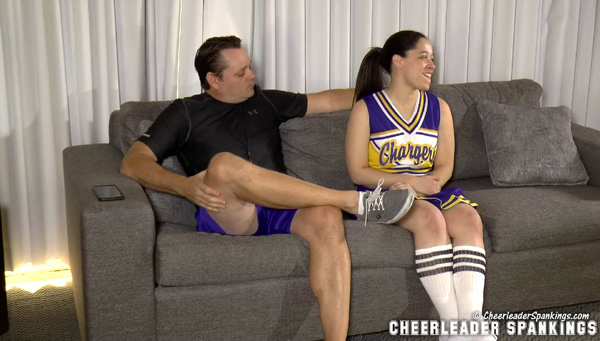 To welcome Mackenzie Reed to this blog we are showing three stages of a spanking through the latest scene on Cheerleader Spankings. This scene, more than most shows a huge difference in the before and after stages… and the middle spanking part is another hard one which produces real tears from poor Mackenzie in “Mackenzie’s Tears“.

Now, “poor Mackenzie” implies that we have some sympathy for the punishment given to her but at the start of this scene we have anything but sympathy. Mackenzie starts off as a brat, and right from the start we know that this little madam deserves a spanking. Not only has she been late way more than can ever be acceptable, but she’s not sorry about it… she laughs it off. This is the “Before” stage!

It takes coach Johnny Lake, to pull down the panties of her cheerleader outfit and spank her bare bottom for her to start to take any notice… 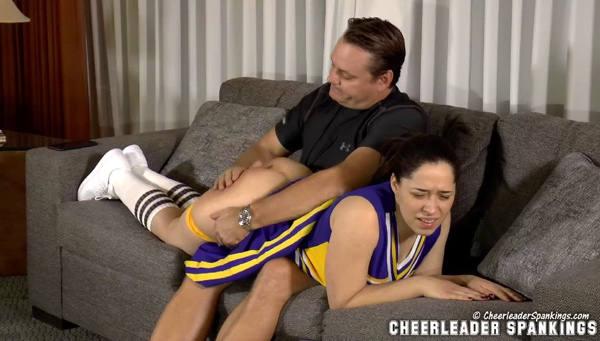 Mackenzie had been late for practice 12 times. Her uncle was one of the biggest contributors to the Cheer Squad and she had been protected by this fact. Until now! He had just retired and had no influence anymore meaning Mackenzie’s poor attitude and behavior meant there would now be consequences, as Coach Lake gleefully pointed out! He told her that constant lateness was unacceptable and this would be the first example of consequences in future. He spanked her over his knee with her panties pulled down and because she had been late 12 times, he devised the following additional punishment. She would receive 12 licks with the leather Reformatory Strap followed by 12 strokes of the cane. Mackenzie never felt so humiliated being punished like this and by the time of her caning, she is crying real tears! She promises to do much better and be a productive member of the squad from now on!

Then comes the “After” stage, and it’s here that we probably have more sympathy for the naughty little brat who was so arrogant at the beginning. Through the course of the spanking we see another side to the naughty lady, and now, with her weeping and the tears rolling down her cheeks we probably feel some regret that she forces us by her actions to punish her so hard. Having said this, assuming that Mackenzie enjoys spankings… she probably likes spankings more the harder they are, so we shouldn’t feel too sorry. We should just appreciate this for what it is… a really nice hard spanking of a new spanking model who happens to be a very naughty cheerleader. 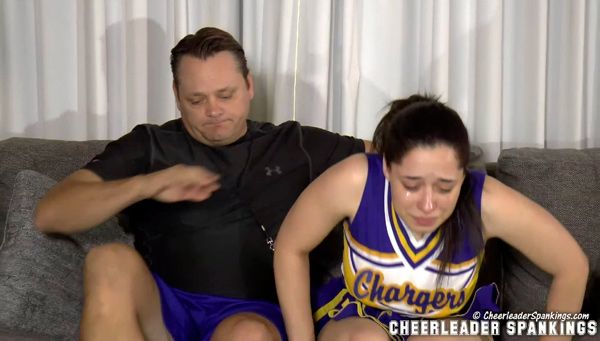 At the start it feels like there is a long period of time that Mackenzie has been misbehaving for, so now she must be punished for all those many occasions with one big spanking. The gravity of the situation really adds to the psychology of this scene, and may assist the tears to start rolling. It’s a nice hard scene and Mackenzie Reed is a really nice new member of the spanking world that we hope to see much more of. For now, you can watch this scene at Cheerleader Spankings!