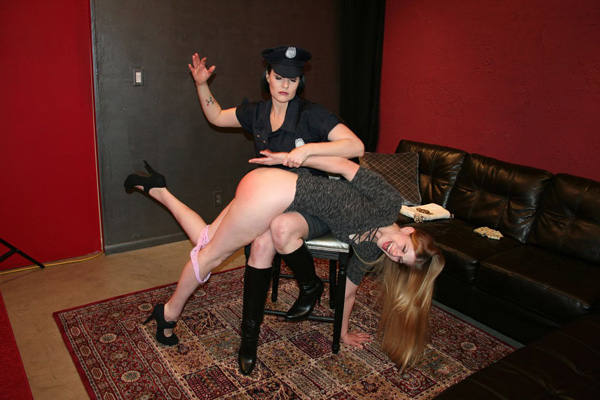 Readers will know that I am a huge fan of switches in spanking. Ladies who both give and receive spankings can be very sexy indeed. But possibly the finest example of a switch is one who spanks one girl before getting her own comeuppance from somebody else. It’s the ultimate sting in the tail for a spanking scene. This movie is called “Caught Red-Handed” and features some F/F, M/F and MF/F spanking at Shadow Lane…

Beautiful but shady traffic cop, Snow Mercy, spots a leggy blonde, Harley Havik, running a light and follows the pretty girl home to shake her down for a bribe. When Harley can’t pay the bribe one thing leads to another and soon Snow is dragging Harley down across her sturdy lap and spanking the lovely girl! Harley gets a vigorous bare bottom spanking from the 5’11” amazon.

One of the highlights of any scene with Snow giving an OTK spanking is seeing her uncover the spankee’s bottom. She seems to have a unique way of pulling down those panties, which is always very theatrical and pronounced. This time is no different and Snow labours dramatically, lifting the panties up before slowly raising them over Harley’s upturned bottom.

Then, Harley’s boyfriend, Steve Fuller, comes by Harley’s studio and Harley tells him the story of the shake down, even providing evidence. While Steve is amazed at the dishonest cop, he is even quicker to take issue with Harley, for not paying her tickets before incurring new ones. Thus Harley is spanked in the first of the M/F scenes in this epic tale…

Officer Snow shows up at Harley’s studio the next day to collect her bribe, but instead of having her palm greased, she winds up getting her own gorgeous bottom smacked by her victim’s stern boyfriend. Harley watches with glee as Steve upends the brunette beauty and spanks the hell out of her milky white ass using only his hard hand. Snow kicks and cries and whimpers, but receives no mercy from the pair of justice seekers. 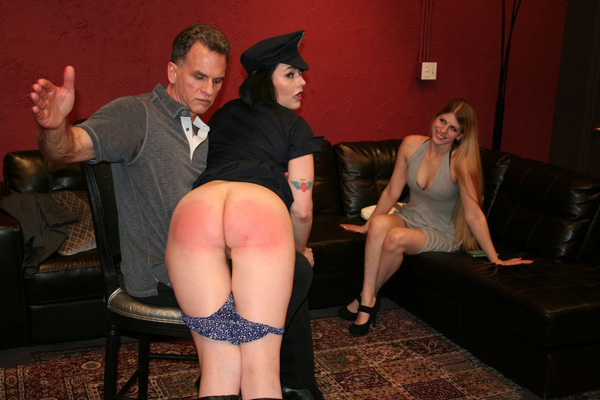 Snow’s luscious white backside is turned a dark rosy red by Steve’s relentlessly punishing hand before she is released. Then the tall goddess is placed on her knees on the sofa, with Steve and Harley on either side of her glowing bottom, to burnish it with additional smacks. 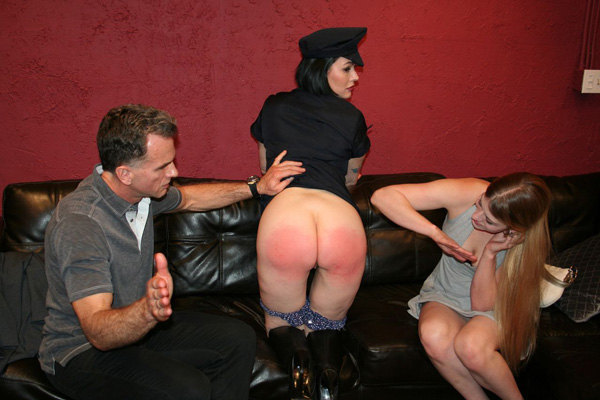 Unusually for such a long movie, this scene is all hand spanking with no implements used at all. But with spanking from trusted hands like Steve Fuller and Snow Mercy, you don’t always need any implements. It’s an all-star spanking movie and two two bare bottoms on show here are big and beautifully round.