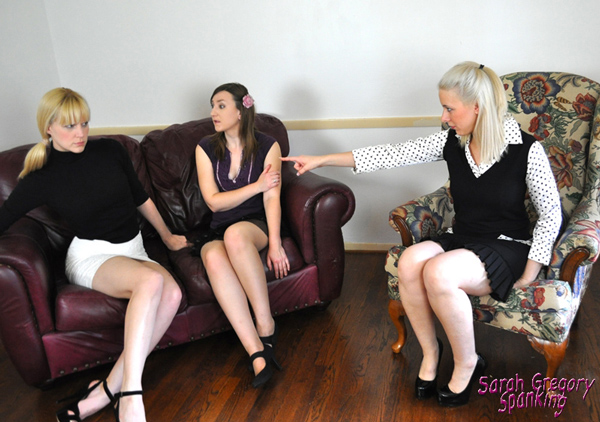 Sarah Gregory is back, and this time with peroxide white/blonde hair… In a previous update on her website, Sarah Gregory Spanking, she was getting punished by her boss, played by striking silver-haired, Dana Specht. With both ladies having silvery white hair they definitely looked like they might be related (see Momma Spankings).

In the latest scene Sarah plays the executor of a trust fund that has been left to two stuck up brats by their grandfather. British spanking models Pandora Blake and Amelia Jane Rutherford are the brats in question. When these two stuck up and sassy girls come to pick up their first checks, they were not expecting there to be a clause that said they had to be spanked each and every time they came to collect a check. Grandpa had watched these two girls grow into stuck up, self-centered, materialistic upper east side girls and had wanted their attitudes to stop. This way he could ensure their behavior changed, even if he was not around to witness it himself.

Miss Gregory points to each girl in turn and beckons them over her knee. It is Amelia’s turn first and the tall, leggy blonde does not submit to her punishment without a fuss. Anyone familiar with AJR will know that she is more than capable of brattiness, especially after she has gone over someone’s knee. In this scene there is something about either her clothes or the camera angles but her long legs seem to go on for longer than ever! 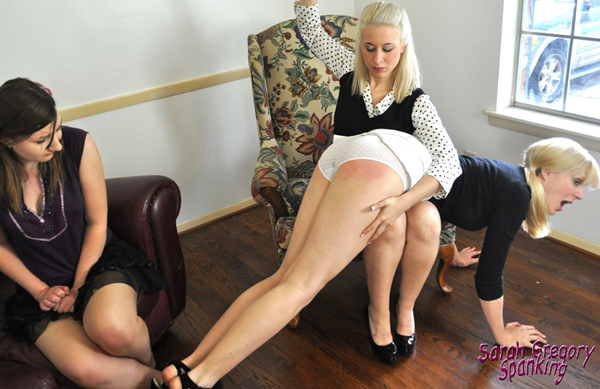 Then, Amelia kneels herself on the couch and it’s Pandora’s turn to go over Sarah’s knee. Pandora is wearing a type of skimpy panties which seems to match Sarah’s top. She makes the perfect spoiled brat in her pretty dress and tan nylon holdup stockings. 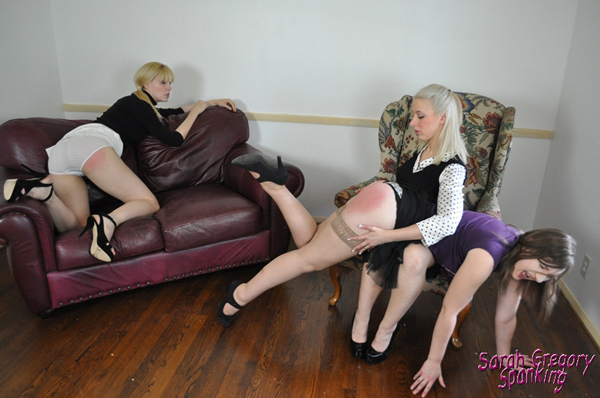 To see more of Sarah and her sexy spanking adventures with many more American and British spanking models sign up today at Sarah Gregory Spanking!

2 thoughts to “Spanked from Afar”