It’s been a while since we’ve seen spanking model Ashley Graham and it’s a welcome return for this sexy hottie at Cheerleader Spankings. In “Prove Yourself“, Ashley plays an over ambitious cheerleader who gets spanked. She wants to rise to the top as soon as possible, by whichever means. It turns out this means that she’ll try to seduce the coach in order to get a top spot on the cheer squad. However, the coach, Johnny Lake, is unresponsive to her advances and sets about showing to her how disrespectful and irresponsible her actions have been.

Many spanking enthusiasts will already know how sexy Ashley Graham can be in a scene. The hottie has an amazing body, pretty face and a very spankable bottom. This scene is particularly hot because not only is sexy Ashley getting punished in her cheerleaders’ uniform, but she’s wearing white panties.

Her white panties are simple and a little on the large side but are quite tight-fitting – perfect for a spanking. They are the type of panties that real-life cheerleaders probably wear because they cover everything that needs covering during those high kicks and are just very simple and plain. They certainly cling to Ashley’s lovely bottom as the spanking begins, but then they are pulled down…

It’s been such a long time since we last saw Ashley that this scene feels like we’re discovering a new spanking model again.

During a long trip away with the football team, one of the senior cheerleaders, Ashley Graham, thought she could seduce Coach Lake to give her a top position in the squad. However, Ashley had been drinking and made a foolish clumsy attempt at trying to “persuade” her coach who was shocked by her advances. Coach Lake quickly took her over his lap. She struggled and complained but he relentlessly spanked her bare bottom after pulling down her white panties. He scolded her, reminding her about how her disrespect for him and her fellow cheer girls would not be tolerated.

Ashley Graham’s bare bottom is fantastic and she gets a nice, hard hand spanking first over the knee, then she gets on all fours and gets spanked kneeling on the bed. There are some nice reactions, as you’d expect, and hot body Ashley looks amazing as she is put through her paces in this exciting M/F scene…

See over-ambitious cheerleader, Ashley Graham, get her just desserts plus many more scenes with loads of naughty cheerleaders getting sexy and hard punishments at Cheerleader Spankings and you can watch plenty more movies of sexy Ashley at Sarah Gregory Pass!

In “Multiple Detentions” on Triple A Spanking a cheerleader, two geeks and the headgirl are all in trouble. Joelle Barros and Nyssa Nevers are two bespectacled geeks, Ashley Graham is a cheerleader and Carissa Montgomery is the head girl. All four are in detention together and have their regulation white knickers pulled down for some old-fashioned discipline…

Four girls are given a detention punishment together at the same time. They are the most unlikely collection of naughty reprobates to ever appear together. Two bookworm types who have committed infractions in the School Library, a slutty cheergirl due yet another discipline session and the Head Girl who also has good reason to be there and give a full report on these girls – but she also gets a surprise punishment too for some poor behavior not befitting a girl of her status! This is the one and only time all four of these girls have ever appeared together for this rare multiple punishment.

Watch this whole scene and many more kinky spanking scenarios at Triple A Spanking!

Today’s spanking scene is from “Broken Hearts and Busted Bottoms” and features two of my favorite spanking models Sarah Gregory and Ashley Graham. We’ve spoken a lot about Sarah, but her nemesis in this scene deserves a big mention. Ashley’s piercing blue eyes, good looks, nice figure and pert, round bottom make her the perfect spanking model. On top of her physical attributes, Ashley’s personality also shines through and she can take quite a spanking, as you can see in this scene…

Sarah has a broken heart, she is a crying mess over her break up but sister, Ashley is constantly making fun of her. Daddy catches Ashley in the act and instead of spanking her himself, he gives Sarah permission to spank her sister. Sarah, of course, grabs the opportunity with both hands and soon sexy redhead, Ashley Graham, is over her knee with a fast-reddening bottom. First, she spanks her with the hand over her short, black skirt, then over her panties, then on her bare bottom…

Finally, to really make sure her sister learns her lesson, Sarah spanks her naughty bare bottom with a wooden hairbrush…

You can see much more of these two sexy beauties (obviously lots of Sarah and quite a bit of Ashley) at Sarah Gregory Spanking!

Ashley Graham is facing the corner wearing nothing but skimpy lingerie and with her hands tied behind her back. Kendra James approaches her from behind, likewise this sexy redhead is also wearing very little. With submissive Ashley in hot pink and Kendra in red lingerie the stage is set for some lesbian kinky spanking…

Kendra leads her playmate over to the bed where she bends Ashley over onto her front. With her hands still tied behind her back, Ashley then has her pretty pink panties pulled down, and the fun begins…

First of all Kendra slaps and spanks Ashley’s submissive naked bottom, then she uses a pair of little pink floggers on her restrained girlfriend…

The action continues with both ladies losing their bras as Kendra continues to tease and dominate gorgeous Ashley. She unties Ashley and uses her hands, a leather paddle and even a riding crop to tantalize poor Ashley’s bare bottom and lovely bare breasts. As you can see this is a very sexy scene indeed with plenty of sensual lesbian kissing and caressing in the privacy of a hotel room while a fetish convention is happening elsewhere…

Kendra James and Ashley Graham are both very sexy fetish models, there are plenty more kinky models joining your hostess Sarah Gregory for some lovely F/F and M/F spankings on Sarah Gregory Spanking!

Today we have a review of some of the recent updates on lesbian bondage website: Whipped Ass. There are some new faces to us and some ladies who readers will recognize from other movies we’ve posted about… 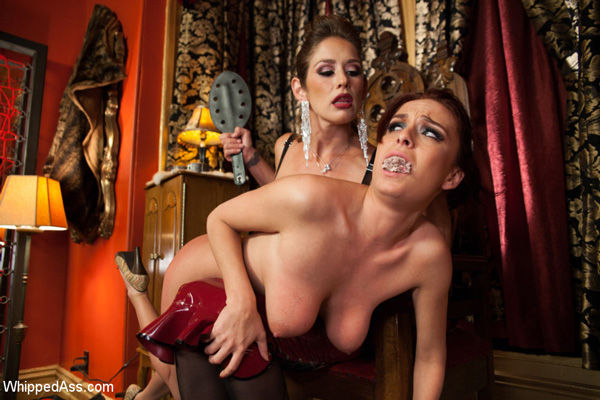 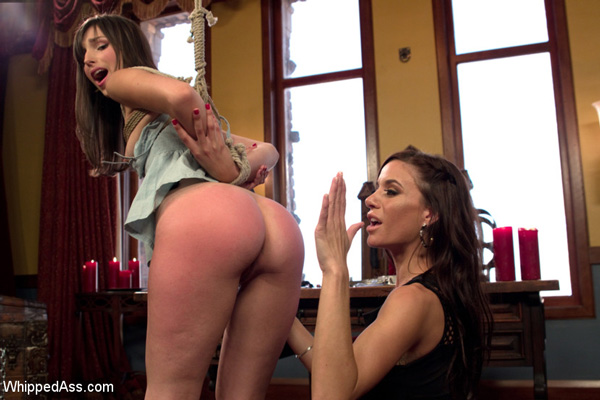 And finally, we’ve seen quite a lot of Syren De Mer in recent, generally on top, but here she’s getting dominated by sexy redheaded model, Elle Alexandra…

Watch all three of these sexy and hard lesbian kink movies, along with many more, at Whipped Ass!

Ashley Graham is a very naughty and bratty young madam who shows some of that sassy attitude as she wriggles, complains and squirms over John’s lap as he gives her a deserved spanking after complaining about being on a spanking shoot rather than modelling lingerie! Ashley hasn’t been spanked for a while so what better than to get her lovely derriere nicely tanned with a good old fashioned OTK spanking!

The beautiful spanking model looks amazing as she teases and poses… which all makes her hard spanking all the better. Then, finally, she faces the wall with her hands on her head to show off that hot body again and display that lovely blushed bottom.

Ashley Graham is a gorgeous girl who we loved filming and she has the most jigglesome booty and boobies imaginable! See for yourself in her first scene at Triple A Spanking.

I’ve thought for a while that Pixie would make an amazing top/switch so it’s great that she’s started to take my advice. In this scene she’s punishing her sister, played by a new spanking model, Ashley Graham. As you can see these two ladies are beautiful all over. There is always something nice to look at and Pixie’s stern chat during the hard paddling is very nice to hear. As you can see, Ashley takes quite a thrashing, her bottom gets very colorful indeed…

You can see more of sexy Pixie on both ends of a good spanking, and see this full scene with Ashley only at Punished Brats.