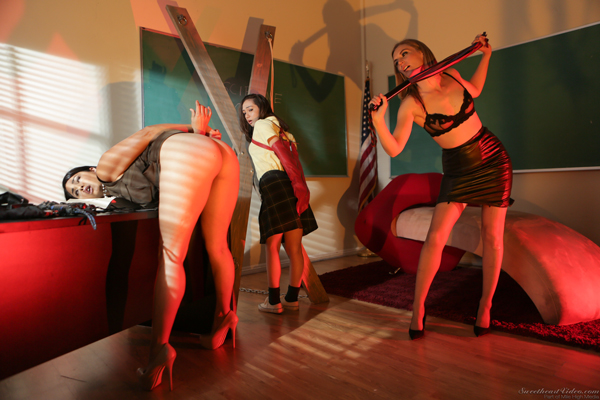 Here is another lesbian domination scene from Sweetheart Video. Mona Wales plays a strict teacher who is teaching Lily Jordan how to respect authority in the classroom… in the middle of the night. “Respect Authority” has some unusual lighting that adds mystery to the scene as the punishment and lesbian domination all happens in the shadowy, dusky kind of light.

Harley Jade wakes up in the middle of the night and hears something going on in the next room. She walks to the doorway and looks in. She sees strict teacher Mona Wales punishing Dana Vespoli by whipping her ass as she bends over the desk. 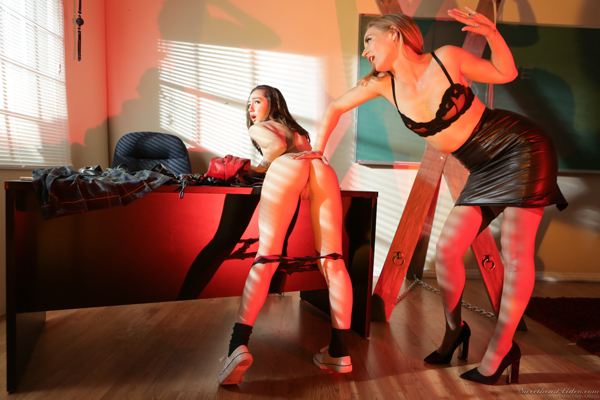 Then, when Dana is excused, it’s Lily Jordan’s turn. Lily has been in the room the whole time with her arms restrained behind her back and wearing a school uniform as she awaits her turn. Harley watches as Mona in her tight leather skirt is teaching Lily Jordan how to respect authority. Lily Jordan behaves herself and submissively does as she’s told as Mona takes full advantage of her.

Mona dominates both Dana Vespoli and Lily Jordan separately and we see everything that is happening through the eyes of Harley, who is peeping into the classroom. Then, after the punishment comes the reward for naughty Lily…

Watch this full movie plus many more lesbian encounters at Sweetheart Video.